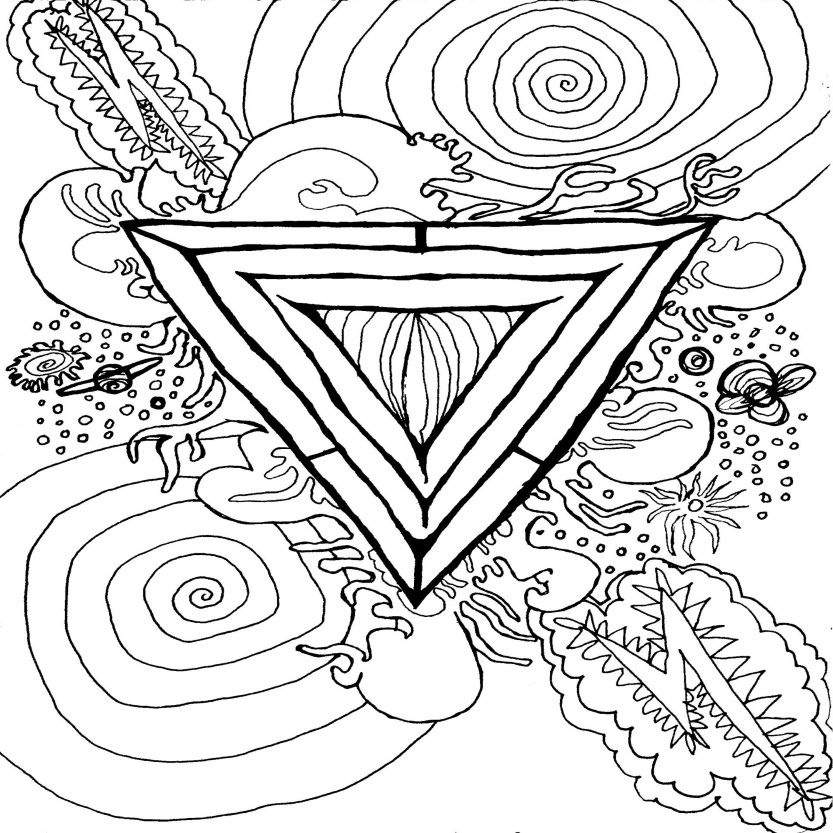 I bow to the Goddess who is ’the soul of All Yantras’. – Lalitāsahasranāma

Gateway to the Goddess is a sister release to last year’s Cosmic Consciousness EP. During this time through stillness and deep meditation I explored and recorded strong internal pyramidal manifestations, which often relate to or denote a tract of motor nerves within the pyramid of the medulla oblongata in the human brain. Within these intensive meditations from last year I recorded two visions within the discipline of free hand drawings, of which Gateway to the Goddess is the second. Here in the drawing shown above the rhythm of creation is crystallized in the primal symbolism of cosmic location, the inverted triangle symbol of creative feminine power, otherwise called the ‘Yoni’. This female emblem or yoni-mandala of the Sakti-principle is also associated with the great Goddess Kali. The three sides of the yoni, the primordial triangle stand for the three qualities composing nature; Sattva, the ascending quality, Rajas, the kinetic quality and Tamas, the descending quality or inertia. In visual and sonic terms this release is the diametric opposite to the Cosmic Consciousness EP though it resembles and has in common numerous coincidental factors.

The above quote is from the Lalita Sahasranama (Lalitāsahasranāma) which is a text from the Brahmanda Purana, a sacred text for Hindu worshippers to the Goddess Lalita Devi (the Divine Mother or Goddess Durga, in the form, Shakti). Etymologically, “Lalitha” means “She Who Plays”. In the root form (vyutpatti), the word “Lalitha” means “spontaneous” from which the meaning “easy” is derived and implicitly extends to “play”. This sumptuous two track album of luxuriant immersive electronic music journeys through various moods and vistas. Gateway to the Goddess pays homage and is lovingly dedicated to my mother, my sister, Olivia Robertson, author, artist, co-founder and high priestess of the Fellowship of Isis (a peaceful society honoring the Goddesses of all cultures, races and religions) and finally but by no means least to the magnificent and praiseworthy Thai Lanna Buddhist deity Mae Surasatee (a manifestation and emanation of Saraswati (Sanskrit: सरस्वती, Sarasvatī) the Hindu goddess of knowledge, music, art, wisdom and learning who is worshiped throughout Nepal and India). The album has two tracks of various lengths that will make it a useful and hopefully beneficial tool within rituals, meditations, traveling, extended club floor excursions or just straight forward listening pleasure. An excerpt of the track Garden of the Goddess from the album can be heard via SoundCloud below. The album will be available through numerous global digital purchasing, streaming and smartphone services.